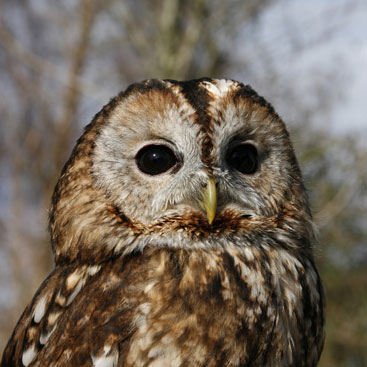 Owls are found worldwide with the exception of Antartica and their habitats range from forests, mountains, deserts to open prairie land, there are thought to be over 220 different species of Owl in the world which range in size from the tiny Elf Owl to the large and magnificent European Eagle Owl. Owls are not related to diurnal birds of prey although they hunt in the same way using there beak and sharp talons to catch and kill their prey.

Owls are easily recognised by their large, rounded head and huge forward facing eyes, their beak faces downward and they have soft plumage coloured to help them blend in with their natural habitat.

Owls are classed as nocturnal creatures and are very skilled at hunting in low light levels with the aid of their excellent hearing, large eyes and silent flight but only a third of the world’s owls are strictly nocturnal.

All owls belong to the order Strigiformes, the order is then divided into two families:

The collective name given to a group of owls is a Parliament.

It is illegal to release captive bred owls into the wild and like all birds of prey owls are protected by law, it is an offence to disturb or harm them in any way.

We have compiled and made available further information on Owls in the following categories: 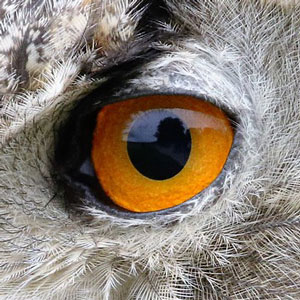 Owls have very large forward facing eyes which are tubular in shape, they cannot move their eyes like we can as they are held in place by large bony rings called sclerotic rings, to compensate for this Owls have fourteen bones in their neck, humans only have seven, allowing them to turn their heads 270 degrees either way and tip their heads almost upside down. Owls cannot focus on anything at close range so have very sensitive whiskers on either side of their beak to help locate their prey once they have caught it, they have excellent eyesight at long distances and have binocular vision, their field of view is about 110 degrees, with 70 degrees of that being binocular. Owls will also bob and turn their heads to help focus on things. Owls eyes are designed by nature for hunting in low light levels, Owls have many more light sensitive rods than cones in their eyes, this means that Owls only see limited colours.

The Tawny Owls are said to have the best developed eyes of all the Owl species and Eagle Owls have better daylight vision than humans. Owls are not bothered by daylight and many will hunt just as well during the day as they do at night. 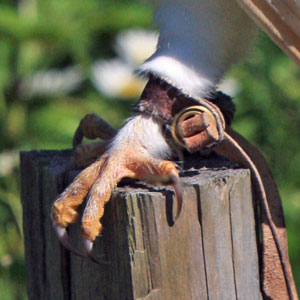 Most Owls rely on their hearing more than their site to locate their prey so an Owls hearing is very highly developed. Their ear openings are situated behind their great big eyes on the edge of the facial disk. Some Owls have ear tufts on the top of their heads, these have nothing to do with the Owls hearing at all. The Owl's hearing is much more acute than a humans and they can hear their prey moving on the ground amongst leaves, undergrowth and even under several inches of snow.

Owls that hunt almost entirely by using their hearing have a very pronounced facial disk and asymmetrical hearing, one ear opening being higher than the other, the facial disk acts like a satellite receiver dish channeling the sound of the prey into the ear openings. The Owl locks on to the sound and keeping it's head in line with the sound swoops down extending it's feet and spreading it’s talons wide, usually closing it's eyes before it kills it's prey.

Owls have very long legs, mostly hidden by the soft, loose feathers on the Owls belly. Some Owls, like the Barn Owl, have bare legs to help them catch prey in dense undergrowth and Fish Owls also have bare legs to stop them getting waterlogged when catching their prey in rivers and streams. Eagle Owls, Ural Owls, Great Grey Owls and Snowy Owls have feathers down their legs and on their feet, this help keep them warm and protects them against being bitten by their prey. The Snowy Owl has the most feathers on it's legs and feet as it lives in a very harsh climate.

Owls have very sharp talons, used to kill their prey and they have a very flexible outer toe which can be angled forward or backward. The larger species of Owl, like the Great Horned Owl also have tremendous crushing power in their feet and will lock on to their prey holding it very tightly until it is killed. 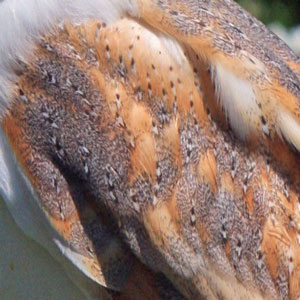 Owls have thick, soft feathers which act like a duvet, keeping them warm during the cold evenings when the Owl is hunting for food. The feathers are coloured to help the Owl blend in with it's natural habitat especially during the day when they need to hide from other predators and birds that will mob them if they spot the Owl. Most Owls have feathers that are shades of brown and grey, there is no marked difference in the colour of the male and the female, with the exception of the Snowy Owl, the male being almost completely white while the female has black barring on the head and the back. The Barn Owl is coloured in such a way that when it is hunting over the rough grassland it is concealed from any predators that might be above it.

The feathers on the edges of the Owl's wings are fringed and soft, this helps give the owl a silent flight as the air passes through the fringed edges and over the top of the soft feathers. The fringed or serrated edges along the Owl's remiges bring the flapping of the wing down to a close-to silent mechanism. Research has shown that the fringes/serrations are more likely reducing aerodynamic disturbances, rather than simply reducing noise. Because the Owl has very large wings for it's body size, it can fly very slowly and glide for long distances near to the ground sneaking up on it's prey. Owls look much bigger than they really are because their feathers are so thick and loose.

Owls, unlike other Birds of Prey, do not have waterproof feathers, and if they get wet they find it extremely difficult to fly, and in some extreme cases cannot fly at all. During weather when it's raining, baby Owlets in most cases are likely to go hungry. This is due to the fact that the parents cannot fly noiselessly when their wing feathers are wet, so cannot catch as many small animals. They also find it very difficult to cope with strong winds because they are so light, so tend not to hunt during very wet and windy weather. Like all birds, Owls spend hours preening and cleaning their feathers to keep them in good working order and they will often bathe in water or rain. 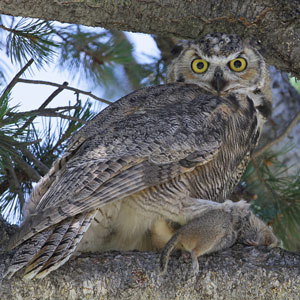 The Owl will hunt in two ways, it will sit at it's favourite hunting site and wait for prey to be located, or it will fly back and forth at low level listening and looking for prey.

Owls do not have a crop to store their food in. Diurnal Birds of Prey pull their prey apart with their sharp beak and pack it into their crop, whereas Owls like to catch food that they can swallow whole. Everything is eaten; the fur, the feather and the bone. If the prey is to large to swallow, Owls will carry it back to the nest site using their powerful feet. Once the Owl has eaten it will find somewhere safe and quiet to sit and digest it's food. Because the Owl's stomach acid is quite weak compared to some birds that also produce pellets, their pellets are larger and contain the bone, fur and feather that they cannot digest. Owls will usually produce two pellets within a twenty-four hour period. The pellet is regurgitated from the Owls oesophagus and is a voluntary act for the Owl. The Owl will open his beak, stretch his neck upwards, give his head a shake and the pellet pops out. 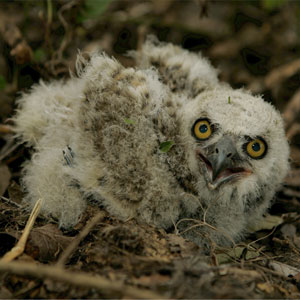 As a rule, Owls will pair for life and come back to the same site to breed every year. They are very vocal at the start of the breeding season, the male calling to the female and the female answering back. The male will present his partner with food to indicate that he is a good provider and they will also preen each other with what appears to be real affection.

Owls are not great nest builders, preferring to either lay their eggs on their pellets, in another birds nest or old squirrel drey, in a shallow scrape on the ground or even in a rabbit burrow.

The Owl's breeding season starts when their prey is readily available and easier to find. In fact, if prey is abundant the female may well lay more eggs than usual, but if prey is scarce for one reason or another they may not breed at all.

The eggs are round and white and laid at intervals of about two days. As soon as the first egg is laid, incubation begins so the oldest Owlet can be up to two weeks older than the last one to hatch. The female Owl will stay with her eggs and her offspring until the Owlets are big enough to keep themselves warm. The male will provide all the food during that time.

The young Owlets will be fully grown at sixteen weeks old and their parents will have taught them to hunt by bringing them small live prey items to practice their hunting techniques on. The young Owlets will be self sufficient by their first winter and more than likely will be driven away by their parents and have to find their own territory to live in. When mature they will find a mate and the breeding cycle will start again. Sadly many young Owlets do not survive their first year in the wild. 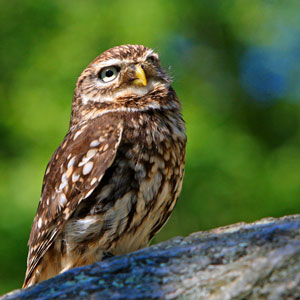 Owls can change their body shape very dramatically when they feel alarmed or threatened. By spreading their wings and drawing them forward they make themselves look much bigger than they really are. They will also click their beak and hiss, lower their head and sometimes move their body from side to side. This makes the Owl look very intimidating and usually scares any predator away.

If the Owl becomes frightened or alarmed it will make itself look very thin, pulling it's feathers tightly into it's body. Some Owls will bob themselves up and down when they become alarmed as well.

During the breeding season Owls are very territorial and will defend their nest sight very aggressively. They have even been known to attack humans who have strayed to near to the nest.

Not all Owls hoot and Owls have a very wide range of calls. They can also make snoring, screaming, hissing and whistling noises. Owls are very vocal during the breeding season calling to their mate for long periods of time and driving other Owls away as they will not share their territory with any other Owls.

Most Owls are resident, staying very much in the same area, but some will travel long distances in search of food or move to a warmer area for the winter.